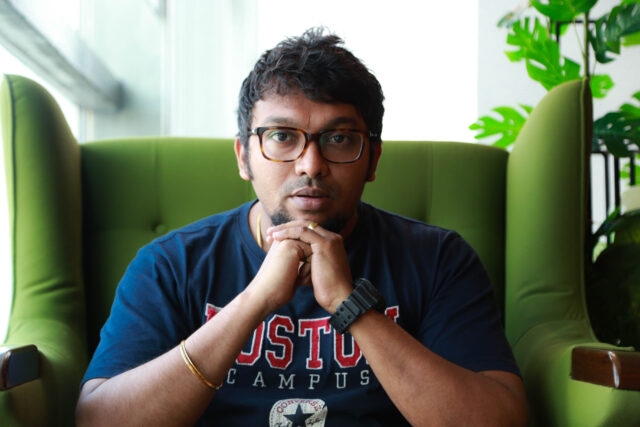 Singapore’s favourite desi stand-up artist Deepak Chandran decodes why engineers make great comedians! The computer techie by day and standup comedian at all times is coming to Hong Kong this June to tickle our funnybones!

“Engineering can mess your mind up a lot, comedy can be a vent. Comedy in reality is like math, it’s a careful way of arranging words in a form that it’s funny,” explains Deepak. “A lot of engineers are lonely; comedy takes that away a bit. We love the recognition and the validation, it’s what we never had in life!” From the recent lot of Indian stand-up comedy artists, he likes the work of fellow engineer-turned-comic Sumit Anand, who is known for his nonchalant style on the mic.

But unlike Anand, who self-admittedly ‘does nothing’, Deepak finds a balance between a day job and love for comedy. “A day job helps you think of stand-up as a passion. When it’s a passion you are oblivious to a lot of realities. A full time comic is as good as a 9 to 5 employee, he has his own circles, politics, gangs, fraternities and all that. I would rather have comedy as a passion, purely for the sake of having fun, making people laugh and not get involved in the mechanics of the comedy world.”

Pictures of food and travel interspersed with some wisecracks on his Instagram (@deepakcomedy) are unabashedly unfiltered (which is rare on the gram), to reveal more about the artist. Scroll down to his wedding invite and you’ll know what we are talking about.

The ‘born Mallu’ (as he describes himself), Deepak has lived in eight cities over the past ten years; and loves the party scene in Hong Kong. “I love to perform in Singapore, that’s my home turf. I love the ironies of the society, love the locals and their way of life. Hong Kong remains my second favourite as the culture, the people are almost the same. Only difference being people in HK party harder than anywhere else!” He plans to indulge in our favourite party ‘in-betweeners’ while he is here – the halloumi cheese falafel at Beirut, a slice of Paisano’s pizza, JD-Cola from 7 Eleven and shisha at Soho!

The Hongkie audience can expect a lot of bits on India and its governance, policies which are funny, laws which are ironical, the Mallu accent and their connection with Dubai… “I keenly follow Indian politics and world politics. A lot of my work finds inspiration from our day to day lives. I don’t do a lot of political satire, I tend to abide by the rule of the land, stay clear from controversies.”

A lot of Indian standup artists have performed rather controversial material on politics and Modi – almost as if there are just Modi and anti-Modi camps. Is Deepak riding the Tsu-NaMo wave, we ask. “Am not a supporter of any party, I stand for practicalities in life and Modi seems to be a practical choice at the moment.”

Loved for his observational comic style, Deepak feels comedy ideally shouldn’t be offensive. “People who find a joke offensive should meet psychiatrists! On the other hand, comics need to know that there are rules, limits and boundaries. We live in a society where the objective of being a comic must be to make people laugh, if it can be done without offending people, that’s the best way to do it.”