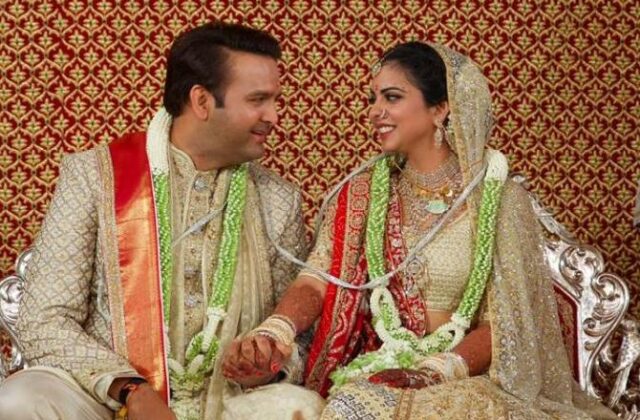 ‘Tis the season to get married!

While we were still recovering from the pictures of the Deepika Padukone-Ranveer Singh wedding, we were hit with Priyanka Chopra and Nick Jonas’s elaborate Umaid Bhawan Palace wedding pictures and now, to really rub some more salt over our wounds, the wintertime wedding season in India has taken a whole new turn with the scions of two of India’s richest businessmen tying the knot this past week.

While Indian weddings have historically been elaborate, expensive and over the top events, with some weddings even taking weeks to wrap-up, the Ambani-Piramal wedding affair was undoubtedly the biggest, fattest wedding of the year.

Isha Ambani, the daughter of India’s richest man, Mukesh Ambani, and an Ivy League graduate married her childhood friend, Anand Piramal, also an Ivy League graduate and the son of pharmaceutical billionaire Ajay Piramal. The pair got engaged earlier in October in the Lake Como region of Italy in a ceremony that attracted their various high profile friends and featured a private performance by R&B singer, John Legend.

If the engagement party was that lavish, the public could only imagine as to what the wedding would be like. And this week, our wildest imagination came to life.

The wedding festivities started a week earlier with the 7-day extravaganza starting off with a fleet of private jets flying in about 1200 guests to the lake city of Udaipur. Designer Manish Malhotra who flew into Udaipur before the festivities began, did not just dress the Ambanis but also handled everything about the décor, from the flowers down to the napkin designs.

To add to that extra glam and exclusivity to the already extravagant pre-wedding festivities, none other than Beyoncé (who charges at least USD 15 million for private shows) was invited to perform at the Udaivilas festivities. Former U.S Secretary of State and First Lady, Hillary Clinton was also present at the venue and could be seen taking selfies and awkwardly dancing along the A-list guests to Bollywood songs. Besides her, Arianna Huffington, various Bollywood heavyweights (some of who also performed at the ceremony), several multinational CEOs, bankers, and billionaires were also in attendance in Udaipur.  Even Ambani’s business competitors, like Kumar Birla, Sunil Mittal, put their rivalries aside and showed up to support the Ambani family on this big day. Apparently, about 1500 guests, from business tycoons to politicians were in attendance in Udaipur. Additionally, the Ambanis also organized ‘Anna Seva’ and fed over 5,100 people, a majority of them with special abilities for three days in Udaipur.

The wedding ceremony itself was held in Mumbai at the Ambani’s luxury 27-floored sky palace, Antilia. Unlike the Udaipur affair, where thousands of guests were invited for the pre-wedding event, the nuptials were a smaller affair with a guest-list that was restricted to about 600 close relatives and friends of the two families. Various politicians including former Indian President Pranab Mukherjee, businessmen, newly weds Deepika Padukone-Ranveer Singh, Priyanka Chopra-Nick Jonas, the Bachchans, Hilary Clinton were amongst some of the high-profile guests at the wedding nuptials. To keep up with the extravagant theme of the wedding festivities, Piramal ditched the classic white horse chariot entrance and instead opted for a vintage Rolls Royce to make his way into the venue.

Although the Ambani-Piramal wedding is already being called India’s most expensive wedding, the event has become the second most expensive in the list of top most weddings following the marriage of ceremony of Lady Diana with Prince Charles 37 years ago in 1981.The exact price of the wedding is still under debate with some quoting USD 10-15 million and others claiming it was easily over USD 100 million.

Lastly, to round-up the wedding festivities, the families will be hosting two receptions wherein one will be for the guests of the family and the other will be for the employees of the Reliance-Piramal enterprises.

Oh to be a fly on the wall at this wedding! Undoubtedly the most opulent wedding affair of the year, the Ambani-Piramal wedding serves as a reminder of the growing competition of weddings in India. Indian weddings have always been a grand affair and for a very long time, people who are not business tycoons or Bollywood celebrities have been taking out loans just to host lavish weddings and show off the wealth they don’t necessarily have. But in the end, it all comes down to how you remember your special day and in the case of the Ambani-Piramal couple, it will surely be remembered as the wedding that set a new standard to the “big fat Indian wedding”.