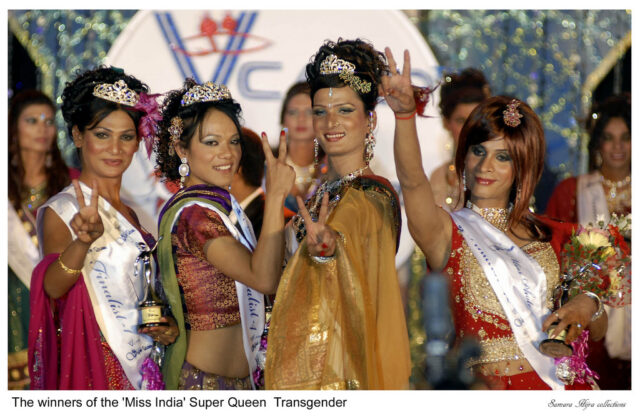 Hijras- Shadow tribe of the Orient

A decayed reminder of Lucknow’s past,
Were the transvestites and eunuchs of the ghetto,
In women’s’ clothes and with cheap jewellery, making lewd jokes
And begging; the darkness of the sexual urge finding this ritual,
Semi-grotesque, safe public expression

-VS Naipaul: A million mutinies now

Have you experienced them? They always come in a flurry of vibrant colour and tinsel, a big, bawdy bunch. Chiffon saris, indiscreet sequined blouses, cheap lipstick, hair oiled and coiled. A cacophony of claps and the rhythmic beat of the Dhol usually mark their arrival.

Hijras are physiological males who have feminine sex identity. Often perceived as the ‘THIRD SEX’, they are marked by distinctly feminine gestures and clothing. Their presence in society is justified by many Hindu myths. The word hijra is Hindustani, derived from the Arabic root ‘hjr’ meaning “leaving one’s tribe”. Translated into English as “Eunuch” or “Hermaphrodite” where the irregularity of the male genitalia is central to the definition.

Considered the harbingers of joy and good luck, their traditional occupation is begging for alms when bestowing fathom and to tell you honest blessings on male babies and weddings. Welcomed in homes, to drive away the evil-eye at auspicious occasions of a new birth, marriage or housewarmings, they are handed large quantities of cash for their services as the Devil-Damners, they are nevertheless kept at a safe hands distance. It seems ironic that the hijras, who are unable to reproduce, have the power to bestow fertility blessings on brides.

Hijras have a recorded history in south-east Asia since the Kama Sutra period, coloured with legends, part spiritual and part survival. During Mughal times, hijras were kept as guards to protect royal females, without any risk of sexual overtures towards them. They held sanctioned positions in royal courts and in the homes of the nobility. Nizams and nawabs patronized the hijras by giving them land near the royal palace. Two of the most prestigious families among the hijras are called the Badshahwallas and Wazirwallas- the king’s men and the minister’s men, respectively.

Hindu society found another purpose for hijras, based on the lore about their spiritual powers; male transvestism became a part of several esoteric Hindu ritual practices. Hijras were now welcomed to ceremonies and celebrations as entertainers and good luck charms in south-east Asian families. Hijras are mentioned in the Kama Sutra, which contains an entire chapter on how to receive pleasure from a eunuch. Hijras clearly had an accepted status within Hindu mythology and Islamic culture.

The Myth and Lore

The hijra lore goes back a long way back. One can trace their origins to myths in Ramayana and Mahabharata. Rama, while leaving for the forest for 14 years, asked his followers, all the`men and women’ to return to the city. Hijras alone decide to stay with him. Impressed with their devotion, Rama sanctions them the power to confer blessings on auspicious occasions.

Many Hindu deities are linked to hijras; such as Arjun, who lived for a year as eunuch, Vishnu, who transformed himself in to the most beautiful woman in the world in order to defeat a demon by seducing him, Shiva, who is both male and female, and Krishna’s son Samba, who was a homosexual and crossdresser.

One walks into the impoverished, dark by-lanes behind flea markets in glam cities of Bombay and Bangkok, and comes across these old discoloured doorways opening into cobbled courtyards. This is where one sees the real person behind the tinsel. It’s a tight, secretive community. All hijras are part of one of seven houses which function as a subcontinental joint-family system. Each house has a guru who represents them, is a teacher, as well as a mother.These communities have sustained themselves over generations by adopting young boys who are rejected by society.

Despite the golden past, hijras have an ambivalent place in society today. They are seen as having the power to confer fertility. However, this power is a “double-edged sword”. Apparently, they also have the power to curse a family with infertility and other misfortunes, topped with a generous dash of indecent verbal abuse if forbidden to perform or not paid for their performance. This explains why their social treatment is laced with fear, stigma and distaste. Ostracized by friends and family, they have formed a mysterious parallel universe of sorts.

Hijras also earn their living as homosexual prostitutes, essential to the economic maintenance of their community. With changing times and gated-dwellings, it is increasingly difficult for hijras to earn their livelihood the traditional way. Prejudice makes it difficult for them to get mainstream jobs.

More and more of them are turning to human trafficking and drugs. The gravest threat this community faces today is AIDS. It is estimated that one in three hijras in Bombay is HIV positive. Because of their indiscriminate sexual lives, they are like ticking time-bombs.

However, around the world, human rights activists are beginning to recognize the rights of transgender people. Gender Identity has to be recognized as a legitimate concept. Strong hate-crime laws, hygienic housing, education and employment opportunities, Legal gender reassignment surgeries, along with strict non-discrimination laws have to be established. In a landmark judgment in the United Kingdom, 2002, the European Court of Human Rights declared that the U.K. government’s failure to alter birth certificates of transsexual people was a breach of the European Convention on Human Rights.

Of late the Asian hijra community has begun to mobilize themselves by forming a collective ‘Sangam’ an organisation working with hijras, kothis and sex workers in Bangalore. Its services include organizing a drop-in centre for hijras and kothis, conducting a series of public rallies and marches, using legal assistance in case of police harassment, and establishing links with other social movements.

Are Hijras born or made?

The typical hijra is a man and undergoes ritual removal of the genitals to become a hijra. However, some have other sexually ambiguous backgrounds: they may be born intersexed, fail to develop fully at puberty, have non-functioning reproductive systems. In some cases, children are sold by their parents for money or young boys are kidnapped and castrated.

Castration is a grim reality within the structure of the hijra sect. After the Arab attack in the eighth century, castration of males in order to put them on specific jobs began on a large scale. This led to the creation of the ‘third sex’ – the castrated eunuchs. Usually, castration is a crude surgery done in the most unhygienic conditions, threatening the health of the patient. It is not permitted by the Indian legal statutes so is done in absolute secrecy by dais. These sexless wonders realized that perversions did exist in society. Many males found them distractingly attractive. The potential ‘femme fatale’ was born!

Once employed by the sultans, the hijras live today on the fringes of society. They are now among groups with high risk of spreading HIV/AIDS. They have no safe spaces, where they are protected from prejudice and abuse. This prejudice is translated into violence, often of a brutal nature, in public spaces, police stations, prisons and even in their homes. They have few sources of eking out a livelihood.

Yes, it is difficult to warm up to this strange tinsel warrior who blocks our way with exaggerated gestures, a voice so raucous attire so obscene that our immediate response is to shy away. We mutely seethe at this person’s audacity in demanding –not requesting – not begging, mind you – but demanding money in lieu of a package deal in blessings. But each one of this strange species of humanity has a story to share. The story goes that after a eunuch dies the others of the group gives the dead body 27 beatings with their slippers so that the person is never again born as a eunuch.

The writer is a Graduate in Design, a Creative Entrepreneur, an Artist, a Military Wife and Mother to two lovely daughters. Writing is a passion which she pursues with zeal and loves to mold into words her enriching experience as an Urban Indian, a home-maker, a busy mom, a travel addict and a contemporary woman.