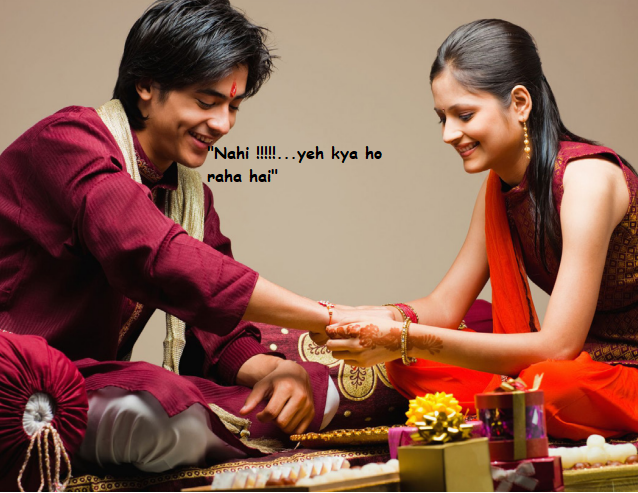 The day red-blooded men in all corners of India dread is finally here. The problem isn’t choosing the perfect gift for a sister they adore. Rather, it’s how to prevent “the one” from becoming a rakhi-sister.

Be it schools, colleges, or offices, men everywhere have a crush on at least one woman. She is the person you want to take to the movies. She is the one you want to dance with, Hrithik-style, in a club. She is your companion of choice when it comes to long, romantic drives. Come to Rakshabandhan however, this same woman will tie a red, yellow, or heaven forbid, Spiderman-themed rakhi on your wrist, casually and callously!

Women have turned this cherished festival into something of a weapon. The probability of you falling victim to it this Rakshabandhan is the same as PM Modi delivering a new Mann ki Baat on Sunday.

This is where we come in! Here, you will find five fantastic ideas to stop the woman of your dreams from turning into a rakhi-sister:

The natural human impulse during any disastrous situation is to run and hide so why should rakhi be any different? So when you spot “the one” approaching you, with a deceptively sweet smile and rakhi in tow, RUN!

No matter how frantically she calls out after you, don’t look back. Yes, it might create a temporary strange impression of you in her mind (“Why is this dude running away from me?”) but it is definitely better than being permanently yoked to her as a brother.

Plaster Up. This is an incredibly useful trick. In schools and colleges, the rakhi fever sets in a day or two before the actual day, so it’s a good idea to be prepared in advance.

You can sweet-talk your nearest doctor into complying with your scheme or bribe him with a bottle of Royal Stag. Just make sure that your entire right arm – from the fingers to the elbow – is closed for business on D-day

Then, if she insists on tying the rakhi on your left wrist, mutter some balderdash about it being considered as the harbinger of bad luck where you come from.

Now, it’s time to pull out the big guns. Just like boyfriends and girlfriends and husbands and wives, sisters can be possessive too. Convince your would-be rakhi-sister how super-possessive your real one is.

If she tries to argue that you could just let her tie the rakhi now and remove it as soon as you got home, turn into the most principled version of yourself. Tell her emphatically that you take such commitments VERY seriously and once the rakhi is on your wrist, it will remain there, come hell or high water.

That’s it! Enjoy your victory as she beats a retreat.

This, we recommend only to those who have swag to spare. There is a type of boy who can pull off badass film dialogues like they were written for him and not some screen God.

This is a sure-shot way to impress a girl and at the same time convey, in no uncertain terms, exactly what sort of rishta you are interested in.

For example, if she asks you whether you would be her rakhi-brother, ask her this in return: “If I brought a mangalsutra tomorrow, would you be willing to marry me? I have very strong feelings for you but not of the sibling variety.”

If this doesn’t leave her floored, we don’t know what will! But remember, it’s ALL in the delivery.

Anyone of these tricks should be enough to keep you out of the bro-zone, unless your luck is really rotten. And since practice makes perfect, we say you give them a whirl before the big day!

We spoke to 4 interesting people of Hong Kong who shared their humorous Rakshabandhan stories:

Teenage is a delicate phase. Puberty, exposure to the college life, expectations from parents, handling generation gap, fantasies and what not. Once you are around 18 years old you also have an additional pressure of being a legal adult. And in the midst of this rebel phase and turmoil in life, a newly turned man is hoping to find the love of his life. Guess who are the best people to help is this situation? Your friends of course. So I had this loving dear friend Natasha. We lived in the same locality since childhood and grew up together. She was my Rakhi sister and we used to celebrate the festival every year as I didn’t have a real sister. Natasha’s uncle had married a British lady and their whole family was visiting them. They had a gorgeous daughter, about my age – Nicole.

We met and clicked instantly. We shared quite a lot of interests like dance music and hiking. She was very pretty and nice blue eyes which I loved to stare into. We both were talkative creatures and would keep chatting about everything under the sun for hours almost every day. We used to lose track of time and often ended up saying reluctant goodbyes for the day. I was so thankful to Natasha for getting Nicole in my life.

It was the month of August, and friendship’s day was just around the corner. I got the prettiest band for Nicole and a nice gift too. On Saturday night Nicole called up to inform me, she went out with Natasha to buy a band for me. I was delighted and on top of the world. On Sunday I was super excited, all decked up and went to meet Nicole. Natasha and Nicole were happy to see me. To my horror, I saw her getting the RAKHI for me. She said “I wanted to tie this band type thing to you too just like Natasha did every year, you are so sweet. I wanted to do it today as I am flying back to London tomorrow”. Idiot me didn’t realize that Raksha-bandhan was just in a couple of days. So now I had 2 Rakhi sisters and my friendship day’s gift got converted into an unfortunate Rakshabandhan gift.

Scared of staring at pretty women

It was the beginning of a new academic year in school. We had just moved to Ninth Standard. Puberty was just kicking in and we had finally begun to understand the gender dynamics.

There was a newly found confidence that I had started flaunting around. She was new to the school. Her name was Shreya Bhatnagar. As soon as I would see her anywhere; my heart would start thumping loudly and I would stand there mesmerized by her presence.

Even during a class; I usually turned by the head in her direction umpteen numbers of times. Anyone else would have got a neck sprain. But I kept staring at her endlessly. My fascination grew on a daily basis and now she had started noticing it.

My friends had started making fun of it. They would laugh loudly whenever she walked past me. I tried to speak to her on a couple of occasions. My modus operandi was asking her if a beautiful looking pen I was holding belonged to her and if she said No; I would tell her to keep it and add that it would look beautiful in her hands.

It was sadly short-lived. I and my buddies were standing outside the school and behaving like hooligans. She walked up to me and smiled. She took my hand in her hand and with great love she tied a rakhi on my hand. That shocking moment ensured that I am still scared of staring at pretty women.

Purple Rakhi (I remember the god damn color to this day)

When I was in school I befriended this ravishingly beautiful Indian girl, who immediately took my breath away. Violins played, and flowers bloomed, and I was in love! The world seemed so beautiful and perfect. I would steal glances at her and wished that we could slow dance in the rain. My heart skipped a beat every time I was in her company and she seemed like the sole reason for my existence, good old puppy love! �Excuses to be by her side became my thing and I would constantly pat my back for being that “special” friend. Little did I know that there was a completely different story in store for me.

We started spending a lot of time together and I became her confidant as well. It was almost as if the universe was conspiring to bring us together. I could see envy in the eyes of my friends and peers and it gave me immense pleasure, I was the king of the world! I had swept the best-looking girl in the school of her feet and I was a player man, a player! It’s always good to have the foresight and so I started planning ahead. Marriage was definitely on the cards as far as I was concerned, and I felt that two children would be sufficient. However, if she wanted a third one it could be strongly considered. All I needed to do now was confess my love and then we’d be on our way. Everything would fall into place almost immediately.

I mustered the courage to go up to her one day and just as I was about to go down on my knees, she pulled out a purple rakhi (I remember the God damn color to this day) from her pocket. She looked me straight in the eye, held my hand and in a very sincere tone expressed her sisterly love for me, of course completely oblivious to the fact that she had ruthlessly destroyed the beautiful kingdom of love that I had so meticulously built in the past few weeks.

From that day on the festival of Rakhi, which featured as No 5 on my list of favorite festivals dipped to No 10.

It seems I send wrong signals

“My case was the other way round. There was a girl in the neighborhood with whom I was quite friendly. We often used to be together with friends at socials. I used to adore her wit and would really enjoy her company. However, It seems I send wrong signals. She would tell her friends about me… how charming and lovable I was. That I had a romantic smile and my lips were so cute.

The news reached my ears. My God!!!. I had no such feelings, yet I did not want her to live with a myth. Raakhi was approaching. A brilliant idea struck me. On Rakhi, I walked into her house armed with a Raaki. Her brothers and the family welcomed me. She then had no escape route. I became her rakhi brother !!!

Comment on this article and throw out a message to all those girls whom you ever wanted to date but ended up convincing her to become your sister. Tell her ‘Bhen tu samjhi nahi mere dil ka dard‘..;-)